The Diocese of Metuchen has announced it will hold three celebratory events including a concert, Mass and lecture – in honor of the canonization of John XXIII and John Paul II April 27.

Both pontiffs are to be canonized by Pope Francis during a 10 a.m. public Mass in St. Peter’s Square the last Sunday in April, which is the Second Sunday of Easter. It will be the first time two popes will be canonized at the same time.

“The upcoming canonization celebrations of our diocese provide a way for our local Church to be a part of this historic, global event,” said Bishop Paul G. Bootkoski. “All are welcome.”

The occasion has special significance for the diocese, Bishop Bootkoski said, because Pope John Paul II, who was the leader of the Roman Catholic Church from October 1978 until his death in April 2005, established the Diocese of Metuchen on Nov. 19, 1981. Prior to that, the four counties of the diocese – Middlesex, Hunterdon, Somerset and Warren – were part of the Trenton Diocese.

Pope John XXIII, whose papacy began October 1958 and ended with his death in June 1963, convened the Second Vatican Council, commonly referred to as Vatican II. This historic meeting ushered in a new way of thinking for the Church – culturally, doctrinally and institutionally – and helped to shape the Church as we know it today, the bishop said.

The diocese’s celebration of the popes’ canonization will begin with a concert April 27 at 6 p.m. at the Cathedral of St. Francis of Assisi, Main Street and Elm Avenue, Metuchen. It will feature the Brass Ensemble from The Catholic University of America directed by Dr. Andrew N. Allphin joined by Cathedral organist Thomas A. DeLessio and the Cathedral Youth Choir.

Bishop Bootkoski will be the principal celebrant at a Mass in celebration of the newly elevated Saints John XXII and John Paul II at the Cathedral in Metuchen April 28 at 7 p.m. Priests of the diocese will concelebrate. A light reception will follow in the Cathedral Community Room.

For more information, visit diometuchen.org/canonization-celebrations or contact the diocesan Office of Worship at worship@diometuchen.org or 732-562-1990 ext. 1634. 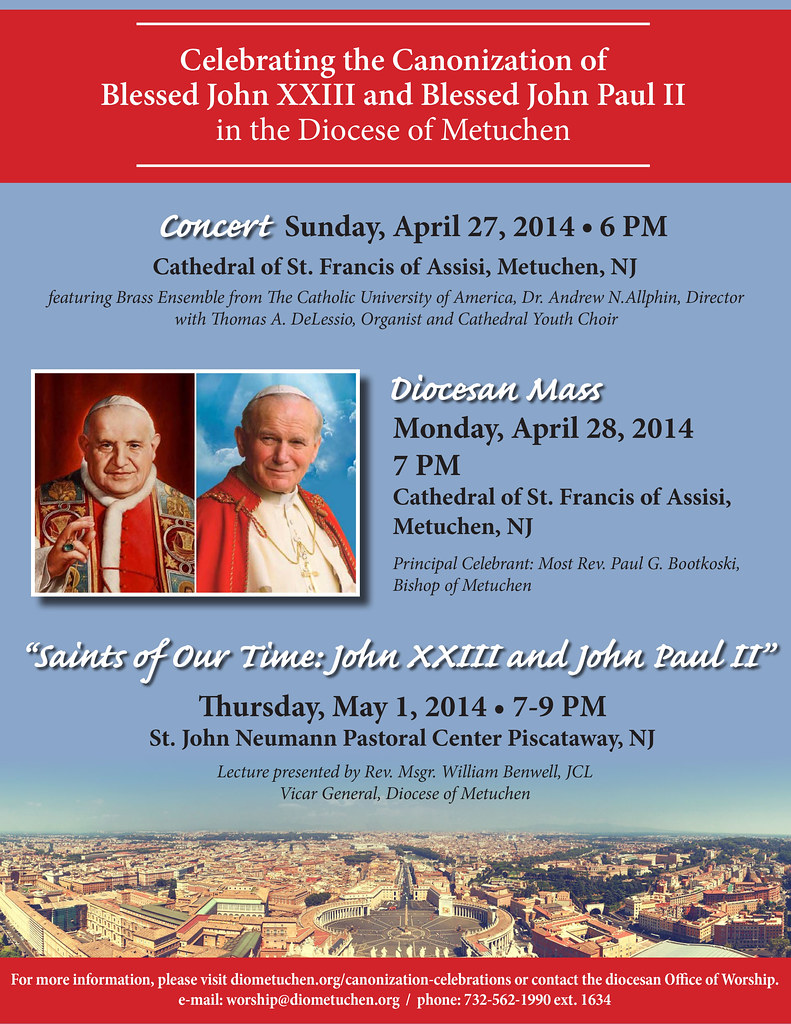