By Thad Ayers via The Daily O’Collegian –
Metuchen, N.J., doesn’t mean much to Oklahoma. The town covers only 2.76 square miles with a population of 13,574 people.

But come Bedlam on Saturday, Oklahoma is going to mean something to Metuchen.

This small New Jersey town is the home of Samantha Cook, an OSU sophomore color guard member, and Dejuan Miller, a senior wide receiver for OU. Saturday, the two will be on the same football field more than 1,400 miles away form home.

Cook said everyone in Metuchen knows Miller; he was a three-sport athlete in high school. “He’s a big deal,” Cook said. “My town cheers for Dejuan. But they also cheer for me.” 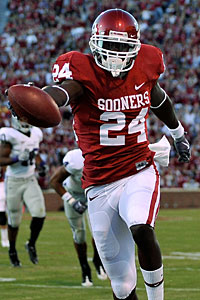 Most people don’t go far from Metuchen, Cook said. Rutgers and many other east coast schools are nearby, so most people stay in this small town; leaving is a big deal.

“We were kind of oddballs,” Cook said. “The fact that we’re rivals is just really crazy.”
Cook said the Bedlam game last season was difficult.

Although Cook is a Dejuan Miller fan, she added that she’ll be yelling “Go Pokes” come Saturday. But OSU isn’t all that obscure for Cook. Her father, Dan, is from Ardmore and was a student in the ‘80s.

Miller may be known as the athlete in Metuchen, but Cook is known as “The Voice of Metuchen” back home. Bruce Peragallo is the principal at Metuchen High School and knew both Miller and Cook. He said Cook was a leader in the school’s music department. “Sam was my go-to person,” Peragallo said. “Anytime I needed the National Anthem sung or some kind of vocal arrangement, I always looked to Sam.”

Peragallo added that Miller excelled at sports in high school, but that both students were good academically. The town, Peragallo said, is a “Friday Night Lights” type of town, except the football field doesn’t have lights.

“We’re a very close-knit town,” Peragallo said. “We have a Main Street, which is really our downtown area. Life revolves around our Main Street.”

The mention of either Cook or Miller’s name in town make’s people’s ears “perk up,” Peragallo said.

“(People) know about their talents; what they contributed to the town and to the high school,” Peragallo said. “We do look out for our own, even if they are halfway across the country.”
Saturday, Cook and Miller will be a little closer when Bedlam kicks off for the 111th time.