Boy Scouts and their supporters descended on the greater Washington, D.C., area for almost two weeks in late July to celebrate 100 years of scouting at the National Boy Scout Jamboree. 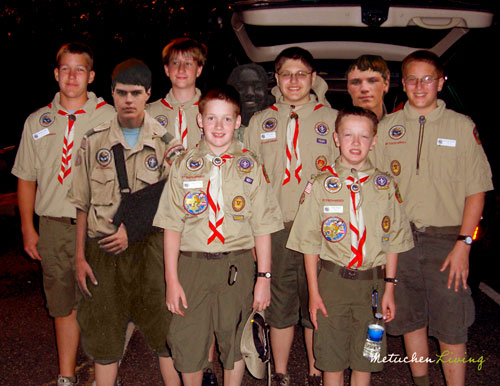 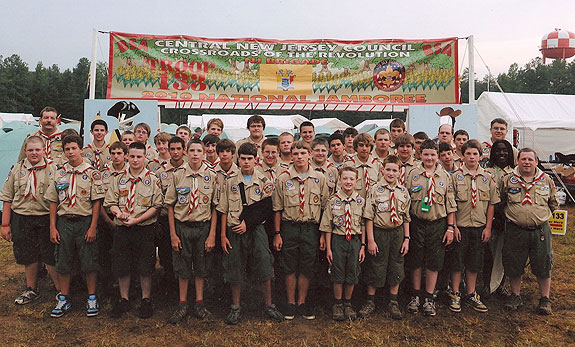 Joseph and Peter Conroy of Metuchen takes a much needed break in their tent at the 2010 National Scout Jamboree at Fort A.P. Hill, Virginia, Saturday July 30, 2010.

“This was a once in a lifetime event, celebrating the 100th Anniversary of BSA, that we were privledged to attend, and will never forget!” says Peter Conroy of Troop 17. Peter attends Edgar Middle School.

For our local boys, the trek to this momentous events was not an easy one. Their preparation for the Jamboree, otherwise known as “Jambo”, started in September 2009. The logistics, financial and mental preparation were hurdled one by one with the help of the dedicated parents, their friends and families. They gathered at monthly meetings in various locations around the county and had a camping trip just prior to the Jamboree to make final plans for the big event. Early on the morning of the 28th, Scout troops traveled hours from their camps, which were spaced across the Jamboree site, in long lines waiting for their turn to be seated in the arena. Always drinking water to prevent dehydration, Scouts waited in anticipation, not knowing who or what was to come of the show.

The program kicked off soon after that as three F16Cs flew overhead, accompanied by a roar of applause from across the stadium. Scouts were welcomed to the Jamboree by Anthony Thomas, the 2 millionth boy to achieve the Eagle Scout rank, the highest rank available in Boys Scouts. This was a momentous achievement for not only Thomas, but for the Boy Scouts of America as a whole. During the national anthem, a representative from each of the 860 troops at the Jamboree marched into the stadium holding an American flag. Minutes before the main show began, President Barack Obama delivered a recorded message, congratulating Scouting on reaching its 100th anniversary. “Some of our nation’s greatest heroes wore the Scout uniform,” he said.

Then the president issued a challenge: “In the years ahead, we’re going to depend on you.” Secretary of Defense Robert M. Gates addresses the audience during the 2010 National Scout Jamboree at Fort A.P. Hill, Va., July 28, 2010. More than 45,000 Boy Scouts and scout leaders are in the region for a 10-day celebration to commemorate the 100th anniversary of the founding of the Boy Scouts of America. (DoD photo by Cherie Cullen/Released)

Secretary of Defense Robert Gates entered the stage and gave a speech full of “anecdotes and comments on scouting that were funny and intelligent,” said Shane Dorval, a 17-year-old staff member from Brunswick, Maine.

The Golden Knights, several skydivers from the U.S. Army, descended down on the crowd and made precision landings on a predesignated target as their names and positions were announced over the loudspeaker. To the surprise of most Scouts, Miss America, Caressa Cameron, made a guest appearance at the show and gave a speech about the importance of Boy Scouts to the future of America. Bob Mazzuca, who is the chief Scout executive also contributed some words of advice to the audience. He helped the boys to remember the significance of the 12 points of the Scout oath (trustworthy, loyal, helpful, friendly, courteous, kind, obedient, cheerful, thrifty, brave, clean and reverent) and how they are as relevant now, as they have ever been.

Near the end of the program, Chief Scout Executive Robert Mazzuca led all attending in the Scout Oath. The evening concluded with what is believed to be the largest fireworks show ever staged by a military base anywhere in the world.

“As scouts, we explore everything from oceanography to astronomy, help communities with service projects, even build and maintain trails and feforestation in Louisiana and Montana,” said BSA Chief Executive Bob Mazzuca, after rappelling down a 100-foot video wall set up at Fort A. P. Hill. “During our 100th anniversary, we set out to celebrate and share what we do with the world, so we’re proud to be able to share the evening with scouts from around the country.”