NOSFERATU: The Vampyre On Stage! 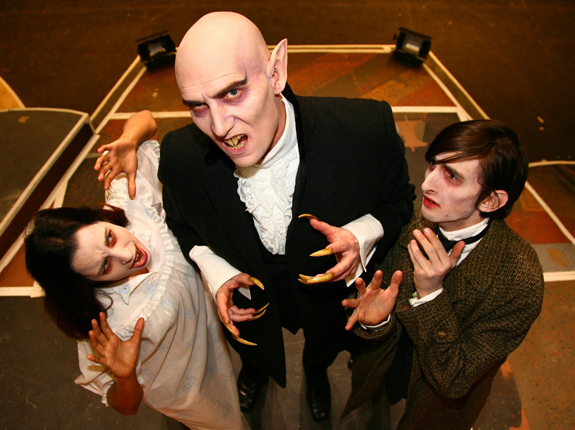 Before Twilight & True Blood, before Dracula even, there was…

ONLY 4 SHOWS left! Last year’s A CLOCKWORK ORANGE sold out. Why risk it? CLICK HERE to purchase $10 tickets NOW!

Based on the 1923 German Expressionist film by F. W. Murnau, Dawson’s stage adaptation additionally draws on Chinese shadow-play, Shakespeare, and explorer/orientalist Captain Sir Richard Burton’s translation of Hindu vampire fables to tell the story of Count Orlock, a rat-fanged Romanian looking for love even as he brings a boatload of Black Death to a German village. From the team that brought you last year’s unsettling hit A CLOCKWORK ORANGE, with makeup by Tom Savini alumnus Dan Diana, the production, which opens with the terrifying image of the eponymous Nos suspended fifteen feet above the audience, will make even the swooniest Twilight fan forget RobPat and his teen beat vamps.

NOTE TO PARENTS: If your kids are old enough to see the b/w films from Universal’s horror heyday: Frankenstein, The Wolf Man, Dracula, they’re old enough for this. It’s very, very creepy, but not graphic in the least.