My hero, the hitter 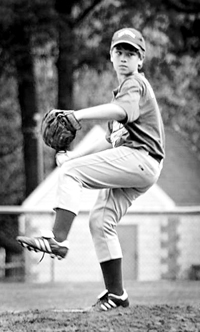 By Tom Davis
My hero isn’t a professional baseball player or politician. He sure isn’t a millionaire or anybody with a lot of power. He’s not a mayor and he’s not a coach. He ain’t even old.

The only diploma he’s gotten so far is the little paper certificate he got six years ago when he graduated from kindergarten.

He’s a 12-year-old kid who shares my name. He’s my son, and he’s got a set of Popeyes that can swing a bat and hit the ball very far.

When he does swing, he almost always hits the ball, and rarely, if ever, misses.

My son’s seen more happen in his life than many of his peers will ever see. All the obstacles he’s had to face in his life have helped shape him into a sharp, smart and even funny person.

More than anything, however, he’s a shining symbol of strength and courage who inspires us every day.

He’s a kid you’d want on your team. When the defense falls apart, and some other kid wearing a flashy, expensive travel soccer uniform is running toward him, kicking a little round soccer ball his way, my son will slam his body on the ball and grind all momentum to a halt.

The other team will get angry and even try to hurt him. In one recent game, a player from another town was so angry about his superior goalie skills that he stepped on his head. But my son will keep playing, and he’ll get even better at stopping the ball the next time, because that’s what courageous people do.

He’ll go out and pitch, and give up some runs in the first inning. But in the sixth inning, with two runners on, he’s the kind of kid you want on your team, standing at the plate, waiting for the next pitch.

He’ll hit the ball with his bat, and make sure the ball’s in play – even if he gets out – because that’s how you get runs in.

Yeah, he’ll get upset when he fails. He’ll bow his head and blink his eyes when the ball hit off his bat is caught. But the next time he’s up, and there’s runners on, you’ll be glad he’s on your team.

This past year, he played better than ever. He hit his first out-of-the park home run. Last weekend, he made a diving play at first base. He played catcher, and once settled down a nervous and unsteady pitcher by raising his arms, and smiling at him.

But the day he truly shined was not a day he hit one out of the park. It wasn’t a day when he dug balls out of the dirt that were thrown by his pitcher.

It was the day he stood on the mound and, barely, by a hair, got out of the way of a screaming line drive that was hit off a $300 aluminum bat – a “Combat,” as they call it, which, for whatever reason, is allowed for use in a league with children.

It was a moment that even inspired some local parents to start talking about getting rid of these things, these juiced-up, corked-up aluminum bats that have no place in a Little League game.

It was the kind of hit that could destroy – and, let’s face it, even end – a life. If my son didn’t have the reflexes he had, I could be writing a very different story right now.

But he did something a lot of people wouldn’t do, right after a a near-miss. He got back up, and kept pitching. He got up, and kept fighting. He wanted to finish the game, a game that his team eventually lost. But my son didn’t care, because that’s what courageous people do.

My son’s season, and perhaps his baseball life, are over. He’s aged out of Little League. Instead, this summer, my son and I will sit in the bleachers and watch my 8-year-old play tournament baseball.

But I wish you could all get to know him, anyway. He’s still be a guy you’d want on your team, because he’ll be the team player he’s always been, even if he’s not wearing the uniform. Sibling rivalry or not, he’ll be cheering on his brother, rooting hard, hoping he’ll succeed.

He’ll realize that it’s his brother and his family, and that’s whom he should be rooting for first. That’s what strong, courageous people do. They keep moving, and they move on, even when many people wonder how they can.

Tom Davis is an award-winning journalist who received a Rosalynn Carter Mental Health Journalism Fellowship in 2004.