Let me start this article with a warning. High School Musical On Stage playing in Roosevelt Park is not the movie. You read right, it is NOT the stage version of the movie every 12 year olds and under have come to love.

After watching the movie version a gazilion time in its heyday (we have two daughters in 2nd grade when this was very popular), we still had a hint of disappointment that the stage version does not exactly follow the plot line of the movie. But as soon as the Troy and Gabriella went up on stage and cheerleaders tumbled on stage with one thrown up so high she almost hit the cat walk, we knew this show was going to be different. We settled in for some wholesome ‘high school’ singing and dancing. Unlike the movie, the stage version opens with the lead characters Troy (Ben Rosenbach) and Gabriella (Megan Bussiere) already at East High. A little off-putting too was Troy’s sidekick Chad (Harlan Rosenson) didn’t have big, curly hair. 🙂

After settling in our folding chairs on this grassy lawn that is Stephen J. Capestro Theater, we quickly got comfortable with the idea that this is not the movie but perhaps a better version of it.

The story that played out Monday night was the usual story of candy-sweet giddy high school romance and typical high school jealousy, with the central message that you—as Troy and Gabriella as we’re told in a song—don’t have to stick to the status quo. If you haven’t seen the movie, here’s the gist: Troy, the school’s biggest basketball star, and Gabriella, the new girl who’s trying to shake her brainy image, do an unexpected audition for the school musical—they get a callback. This rattles the rest of the student body, who aren’t ready to accept that people can ‘Break Free’ from their cliques to try something new.

The show had all the songs plus some bonus. And most important, the cast, well, rocked it. Amanda Braun, a dead ringer to actress Ashley Tisdale pulled off drama queen Sharpay’s screechy character to a T, and Judi Laganga played the perfect Ms. Darbus, the eccentric drama teacher that every high school student is familiar with. We were a bit worried with the dance sequence featuring the jocks. With basketballs flying about on stage with NBA precision, we held our  breath waiting for someone to drop a ball. Nope. Perfect. A huge round of applause should have been dedicated to Choreographer Lorinda Haver! The dancing was just terrific and whoever auditioned and hired the cheerleaders should be given a bonus! It was like watching a musical version of the Gymnastics finals of the Beijing Olympics. And true to form with Plays in the Park, set design and lighting were just superb. We still can’t figure out how they pull off these shows with what we could only guess, a small budget.

Judging from the look of the tweens around us. I’d say this show was a hit.  There were screams at the end of every song and a standing ovation at the finale. And the kid walking beside me to the parking lot after the two hour show didn’t stop singing ‘We’re all in this Together’ until he reached his car.

And why can’t all high school experiences end this way, everyone is friends and happily singing and jumping while shouting We’re All I  This Together! Corny? Maybe. But we’re pretty sure you will walk out of Roosevelt Park ‘Bopping to the Top!’. A note from the producer 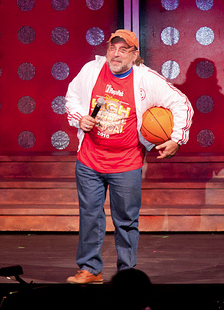 Simply put, HIGH SCHOOL MUSICAL is a phenomenon. Originally created as a small American television film for the Disney Channel in 2006, it has become the mist successful movie that this channel has ever produced. HIGH SCHOOL MUSICAL is a franchise, with a second television film (HSM2) created in 2007 and a feature film (HSM3: Senior Year) released in theaters in 2008. It is the first Disney Channel Original Movie to have a theatrical sequel. A fourth installment High School Musical 4: East Meets West, has been announced to be in the writing stages and to premiere in Disney Channel in 2010. The film’s soundtrack was the best-selling album in the United States for 2006.

With a plot described by the author and numerous critics as modern adaptation of Romeo and Juliet, High School Musical is a story about two high school juniors from rival cliques – Troy Bolton, captain of the basketball team, and Gabriella Montez, a beautiful and shy transfer student who excels in math and science. Together, they try out for the lead parts in their high school musical, and as a result, divide the school. Despite other students’ attempts to thwart their dreams, Troy and Gabriella resist peer pressure and rivalry, inspiring others the way not to “stick to the status quo”.

HIGH SCHOOL MUSICAL on STAGE! has also become wildly popular. Although there has not been a B’way production as yet, Disney Theatrical staged a US tour that began on August 1, 2007 and ended on August 10, 2008. Some of the regional production include:

And no PIP is proud to join this prestigious list with our own version. 1776 took you back about 250 years, WEDDING SINGER travelled back to 1985, and now, HIGH SCHOOL MUSICAL should bring you back to, well your own days in high school.