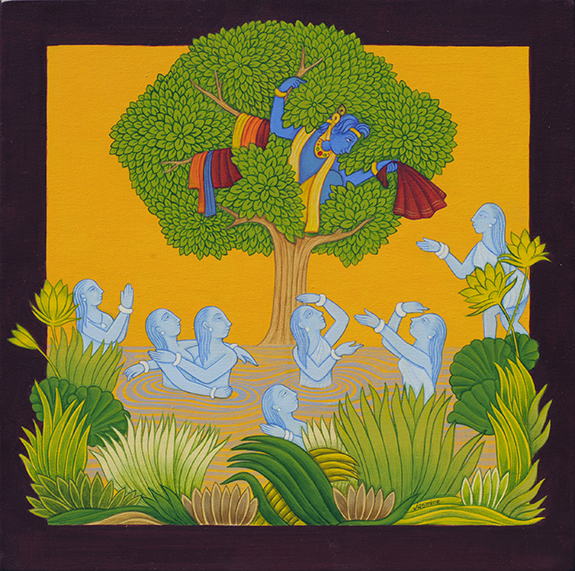 BEYOND THE SEVEN SEAS: paintings by six Indian women artists from North India displayed for the first time in Metuchen, NJ

The Gallery @ the Rotunda is pleased to present an international exhibition of paintings entitled Beyond The Seven Seas.  The work will be on view from October 1 through December 31st during regular business hours in the Rotunda of Metuchen’s Borough Hall located on the corner of Main Street and Route 27 in Metuchen.

Beyond the Seven Seas is an exhibition of paintings of six women artists from North India, each unique with her subject, content and treatment.  While art has no boundaries, the historical, geographical and social background of a place makes the art of every region special in its own way.  Neenu Viji, co-coordinator of the exhibition explains,  “Our endeavor in presenting this exhibition is to reveal the diverse artistic sensibility of these artists which is so different from ours and yet so similar in their creative, dramatic and philosophical approach to their art.”

For instance, Kamal Sohal’s work brings out the emotional aspects of her characters through the depiction of mundane activities, be it an old lady, longing to call her children settled abroad, a man engrossed in Sudoku or a young girl talking to her lover. These images also speak to the societal changes in the subjects’ lives.

Massive architectural wonders and old buildings intrigue Neenu Vij.  For her, these old buildings house thousands of stories and thus she weaves the contents of her paintings around them.  Arched doors, walls made of small bricks, balconies, hazy figures and bright foliage inhabit her paintings.  She emphasizes the implied stories with floating alphabets, encouraging the viewers to experience them in their own way.

Manjeet Meiji’s work deals with Buddha’s serene, calm and meditative world and his philosophy of Karma and non-violence.  Meiji’s soft earthen colors, half closed eyes and yogic postures transfer the viewer to a world which is surreal and sublime.

Jaskanwal Kaur’s work concerns the impact of Indian traditions, customs and beliefs on one’s life.  From the tradition of worshiping the natural elements, she selects the Banyan tree as her subject because of the belief that this tree fulfills wishes, represents longevity and the divine creator, Brahma. Her feather soft brush strokes compliment the sensitivity of her subject.

Rozy Varinder Kaur sees a reflection of complete life in floral forms.  Though the outer body of the flower attracts her, it is the intrinsic details hidden inside which fascinate her more. The microscopic structure of a flower inspires her to create interesting patterns of her own.

Jasmine Pasricha has revived traditional Indian miniature art by giving it a contemporary look.  For instance, in one of her works she converts the multi-handed Goddess Durga into a modern girl riding a bike instead of a lion and holding a laptop and mobile phone instead of weapons, all the while deftly handling the traditional miniature technique.

Beyond The Seven Seas will be on display at the Gallery at the Rotunda in Metuchen’s Borough Hall from October 1st through December 31, 2012.  The public is invited to learn more about these artists and contemporary Indian art at a free reception on Sunday, October 21st from noon until 3:00 p.m.  Light snacks and refreshments will be provided by the Arts Council.