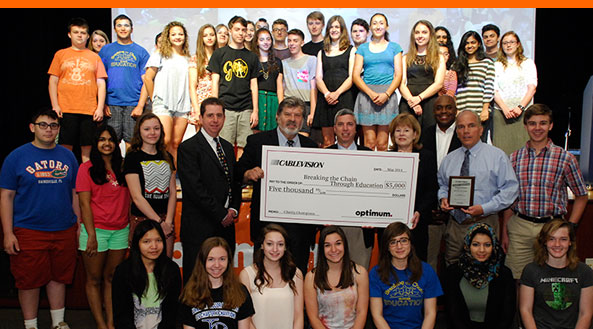 Metuchen, NJ May 27, 2014
Power to Learn recently recognized Metuchen High School students as the New Jersey Charity Champions Grand Prize winners. Charity Champions is a program run by Cablevision’s Power to Learn that encourages high school students to volunteer and raise money for a charity of their choice. Metuchen High School chose to support Breaking the Chain Through Education, a nonprofit organization founded by teacher Evan Robbins that provides funding to rescue groups of enslaved children. Throughout the 2013-2014 school year, students raised over $16,000 for the organization through multiple fund raising events. The money raised has funded the release of 30 trafficked children, as well as funded the development of a school and housing for teachers. Over 200 students attended the Charity Champions Grand Prize Ceremony event, which involved a performance by the school band, a short film about the work being done in Ghana, and original slam poetry performances. Town and School officials all spoke about the importance of community service and congratulated the students on their successful fundraising efforts. The event concluded with Cablevision presenting the $5,000 check to Breaking the Chain through Education founder, Evan Robbins.