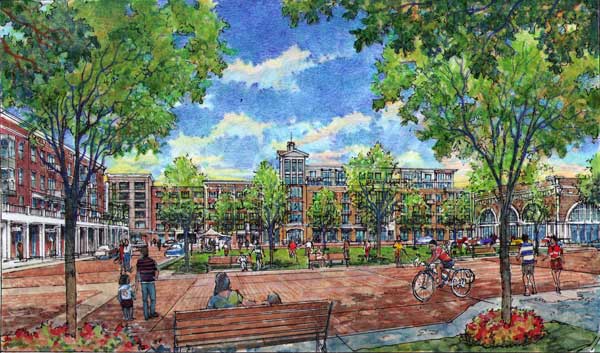 Planned residential units would include studios and apartments with one or two bedrooms
BY JACQUELINE DURETT via Sentinel
The Pearl Street development project in Metuchen reached a significant milestone June 18.
That’s when Avalon Bay Communities and Woodmont Properties were scheduled to present their proposals for the site to a borough project review committee. “Both are excellent developers,” said Jay Muldoon, a member of the nonpartisan committee, which reports to the Metuchen ParkingAuthority. “They [each] have an excellent reputation and have done great work.”
The developers will be sharing their visions of a mixed-use project that would include a parking deck to accommodate 500 to 700 cars; up to 250 high-end apartments no larger than two bedrooms; 10,000 square feet of retail; and a public plaza space for all Metuchen residents to enjoy. The target residents for the rental units would be “renters by choice,” a term that officials have used to describe young professionals and so-called empty nesters.
“One [developer] would be chosen; the other would be considered as a backup,” said Len Roseman, chairman of the Parking Authority.
Roseman said he feels the majority of the community has an open mind when it comes to the project, but he is aware of concerns around it. Many of those concerns come from not being able to see a visual plan just yet, but that should be forthcoming and will be available to the public soon, he said.
Some residents are worried the borough would lose money on the property, which generates $300,000 a year in income — funds that are used to support borough services and reduce the tax rate.
“There is a concern that this revenue will go away,” he said. However, he sees the project’s potential to bring in much more income — both from real estate taxes on the project and from revenue on the new parking garage.
Roseman said the borough has applied for funding from Middlesex County’s open space program “to help us support the town green.” 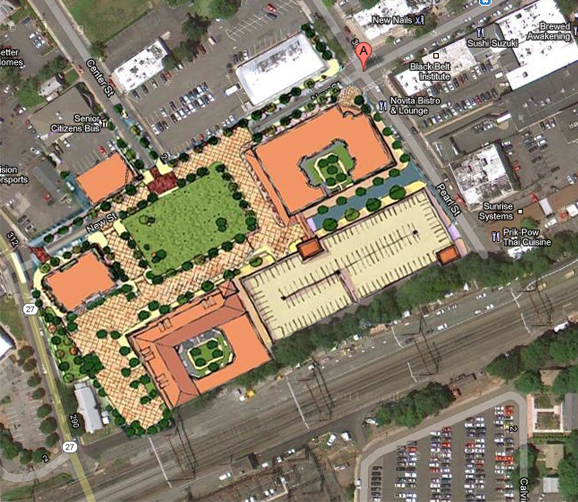 Muldoon stressed that the developers will be incorporating feedback from the community into their project plans. For instance, when the project was discussed at the Senior Center recently, some residents expressed concerns about the impact of adding children to the school district. In order to focus on the target market, elements like playgrounds have omitted from the designs, Muldoon said, and the residential units are slated to be studios and one- and two-bedroom condos.
Roseman compared the property to Metuchen Manor, an apartment complex with 100 units, explaining that the complex produces just three schoolchildren. Since the Pearl Street project is slated to have 250 units, he does not anticipate too many more children for the district.
Many residents responded positively to the idea of the town green, Muldoon said, and there continues to be strong demand for a small food market in the project.
Muldoon said he was optimistic the committee would decide on a developer within the next 30 days, depending on committee members’ availability.
“I think it could happen,” he said.
The chosen developer would then make a presentation at a Borough Council meeting. Roseman said this is a great example of why it’s important to broadcast the meetings so that residents could see the presentation via video. From there, the project would go to the Planning Board for site plan approval.
Muldoon said the redevelopment also has the potential to impact other projects in town. For instance, a traffic study was done in 2009, and to date, the borough has not been able to take action on some of the recommendations to improve traffic circulation and reduce congestion.
“I think there’s an opportunity to utilize some of the revenue to implement some of those improvements,” he said.
This also could jump-start stalled development projects like The District at Metuchen, another mixed-use development, and make other development opportunities nearby look more attractive.
Muldoon stressed that the Pearl Street project, which has been discussed since the 1960s, will enhance the community.
“Metuchen’s always been a great place to raise your family,” he said. “This isn’t going to change that.”