International Film Fest “As It Is In Heaven” 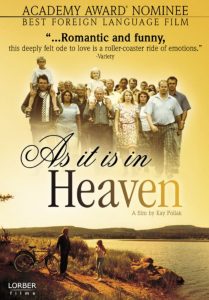 The Metuchen Public Library will be hosting its second film from the international film festival called AS IT IS IN HEAVEN on Monday March 31 at 2pm and 7:30pm. This Swedish movie was nominated for Best Foreign Film at the 2005 Academy Awards. Below is a description of the movie from Amazon.com

As It Is In Heaven is the story of Daniel, a successful international conductor who returns to his childhood village in Sweden. Soon thereafter, the local church choir seeks him out to solicit his advice. He can’t refuse, and nothing in the village is the same again. As the amateur choir develops and grows, he is drawn to the people of his old hometown, makes friends and finds love… A beautiful and engaging film, As It Is In Heaven is a wonderful story about life and love that is sure to inspire and delight. Starring Michael Nyqvist, of the upcoming Millennium series of films, from the books by Stieg Larsson.